God of the Underworld

King of the Underworld

Hades is a character of MYth, based in the Greek deity Hades and created by Zelda Wang. He's the God of the Underworld and King of the Dead, and Demeter's former lover. He's the main character of My Seasons and a key character in A Promise trilogy, has also appeared in Eternal Gift and the second version of MOONLESS and is a central character in the Special Omake.

Hades has a kind and caring personality, he loves Zeus dearly to the point that he would have wanted to break their bond. He loved Demeter and was heart broken when she faded but as a promise to himself he took care of Persephone and a promise form Demeter; loved her like he did her. Hades and Zeus have one thing in common, they both care deeply for their older/younger brother, Poseidon. It is has come to notice that Hades can be naive and clueless, when Demeter invited Poseidon to the field but he declined saying " I don't want to be in Hades way." And of course Hades didn't get the meaning. Kratos and his siblings couldn't even hate Hades since he was no longer under Cronus control. Hades loves his siblings so much that he would have Zeus hate him because that's how much he loves his younger brother.

Hades inherited Cronus black hair and black eyes but his features are more kinder and tender then Cronus mostly likely he inherited it from his mother. Because of this he is very handsome, and like his father he has a well toned body. In A Promise his hair was short but under his fathers control his hair grown messy and two strands of hair that part at his nape, that reached his collar, one of them was braided. Later in Eternal Gift and My Seasons his hair is still the same but messy, longer and the strands of hair are longer.

Hades was too young when Cronus received the prophecy of his mother Gaia , and showed concern about his father. Unfortunately, this good-willed nature would make him an easy target for his machinations.

After Zeus was born, Hades got too close to him, and when he and Poseidon reached certain age, they and their sisters were all summoned by their father. Cronus then locked his three daughters and offered his two sons to aid him to prevent Gaia's prophecy. Poseidon refused, and was locked with his sisters, but Hades couldn't.

Hades went back to his mother's resting place, and tried to attack Zeus, but killed Rhea instead. Rhea was just sad that his son was being manipulated by his father, and expressed sadness before dissappearing. Hades then killed the nymphs that served his mother in and attempt of reaching Zeus, but he was stopped by a young Metis, who took his brother and ran away to Gaia's garden.

Hades became Cronus' right-hand man, and is known he clashed with the Winged Enforcers everytime they tried to rescue their youngest sibling, Nike . Centuries later, his phantasmal hounds found Kratos confronting a young child; upon seeing the child was Zeus, Hades suffered a massive headache and ran away.

Cronus then allowed Iapetus to hold a party in the palace because he wanted to, and made Oceanus to bring all his daughters so Hades could choose one for the night. But at the end of the dance, one of the dancers that looked too similar to the deceased Rhea forced a kiss to Cronus and when was about to stab him, was stopped by Hades. Hades had recognized the dancer as Zeus, and the kiss had a potion that broken the control that Cronus had over him. Knowing Zeus was in danger if he tried to kill Cronus there, he offered to take the "mysterious" assassin away.

Zeus was about to cry of happiness after Hades finally recognized him, but Kratos had to interrupt the happy encounter: Despite having not found Nike, Bia and Zelus had found and taken Zeus' siblings. They were surrounded by the titans, and aweakened for not being loyal to Cronus anymore, Hades asked Kratos to take Zeus and go.

Hades is one of the main characters in My Seasons, which is the story of Hades and Persephone told in a unique retelling of one of the timeless myths of all time: the myth of the seasons.

After a futile audience with Zeus about Demeter's disappearance, Hades runs into Demeter's daughter, Persephone. He learned with great disappointment that Persephone was Zeus' daughter. Hades then vowed to protect and take care of her in place of Demeter and brought her down to the Underworld with him.

Later on Hermes descended into the Underworld and sought audience with Hades. He recounted his place as a witness to how the king of the gods took the earth goddess against her will and after which, implored Hades to return Persephone to the Upperworld per orders of Zeus.

Hades recalled a memory of Demeter telling him about the fate of an earth goddess with child and regreted his failure to protect her from such a fatal destiny.

Meanwhile in the Olympian palace, Zeus had become impatient of Persephone's return, going so far as deeming Hades' actions as treacherous. He suggested a couple of drastic measures, one of which was flooding the Underworld, which Athena frowned upon. Finally he simply decided to storm into the Underworld with Athena and Ares as his escorts in an attempt to intimidate Hades into surrendering Persephone. Surprisingly however, Persephone herself leapt into Zeus' arms, tearfully pleading to be brought away from the Underworld.

Thanatos began by saying that it was about time for Persephone to return. Unbeknowest to Hades, Persephone partook some pomegranate seeds, eternally binding her to the Underworld - to Hades, but not completely. Thus this way, Persephone would be able to stay a certain amount of time in both worlds.

"The world flourishes with the presence of Persephone, the earth goddess of grain and fertility. Because of a special bond, the earth-goddess must go down to the Underworld near the end of every year. When she leaves, the Upperworld turns barren. However, the goddess has never failed to return at the beginning of each new year. The world goes through a cycle of growth and decline every year....This cycle becomes the 'seasons'."

Demeter's spirit briefly came to Hades through a vision and requested that he love Persephone just as he did with her. Hades then proposed to Persephone the throne of the Underworld and sealed it with a kiss. 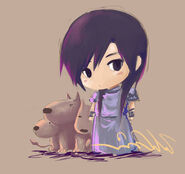 Hades on a cover of Myth: A Promise 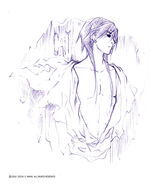 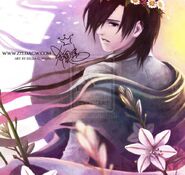 Hades
Add a photo to this gallery

Retrieved from "https://zeldacw.fandom.com/wiki/Hades?oldid=4842"
Community content is available under CC-BY-SA unless otherwise noted.