Queen of the Underworld

Persephone is the current Goddess of Grain & Fertility, daughter of Zeus and Demeter, wife of Hades and Queen of the Underworld. As the Earth Goddesses aren't allowed to have children, Demeter was punished by Gaia and faded away after giving birth to Persephone, leaving her alone in the world. She was first found by Hades, who took her to the Underworld and protected her from harm. Persephone would quickly inherit her mother's power and assumed her role as the Earth Goddess, however, due to willingly eating the seeds from the Underworld Pomegranates, she is tied to the realm, and cannot leave it for more than 6 months. Since then, Persephone's constant transitioning between the world of the living and the world of the dead gave birth to the seasons.

Persephone is very similar to Demeter in kindness and affection.  She is also very innocent since just being born.

Persephone is first seen walking around the place that Demeter and Hades would meet at, looking for her mother.  She is met by a surprised Hades, who mistakens her for Demeter at first.  He decides to take her back with him to the Underworld for her protection.  While there, however, the Upper world begins to die, and it is the belief that Persephone was kidnapped by Hades.  Zeus, along with Athena and Ares, come to the gates of the Underworld and demand Persephone back.  Persephone runs into Zeus's arms, begging to be taken back to the Upper world.

She is then seen in a garden with Artemis enjoying the return of life in the land.  However, Persephone faints in the garden.  Back in the Underworld, Thanatos reveals to Hades that Persephone willingly ate three seeds from an Underworld pomgranate, forming a bond with that world so that she could be with Hades and still perform her duties as the earth goddess.  As the gods ponder over Persephone's illness in the Upperworld, Hades appears and retrieves her, stating to them that the earth would have it's earth goddess back.

Persephone later awakens in the Underworld, and apologizes to Hades for not telling him of her plan and making him look bad, since he is actually very kind.  She continues her job as the earth goddess for most of the year, going to the Underworld near the end of each year, and returning in the Spring, making the seasons.  Zeus meets with Persephone, and apologizes for what he's done to her.  He then allows her to leave for the Underworld early, since the people will have enough food stored during her absence.

Since she returns early, Hades is not expecting her and is asleep.  Thanatos greets her and asks her to wake up Lord Hades in a special way.  After waking up Hades, Persephone disappears.  Demeter then appears before Hades, thanking him for taking care of Persephone.  She states that something has changed within Persephone, and that she must leave her.  Before she goes, she asks that Hades love Persephone and give her the same love and happiness that he gave her.

Hades finds Persephone at a balcony upset because she can no longer feel her mother inside her.  She also feels "sick" after waking Hades up, which is actually her love for him.  Hades then asks Persephone to be his queen, to which she accepts. 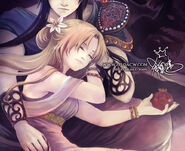 Add a photo to this gallery

Retrieved from "https://zeldacw.fandom.com/wiki/Persephone?oldid=4901"
Community content is available under CC-BY-SA unless otherwise noted.