God of Heaven and Lightning

King of the Gods

Zeus is a character of MYth, based in the Greek God Zeus and created by Zelda Wang. He is the youngest son of the titans Cronos and Rhea. He is the younger brother to Hades, Hestia, Poseidon, Demeter, and Hera. He is the husband to Hera and King of the Gods. He's the God of Heaven and Lightning, the antagonist of My Seasons and the main character of the A Promise trilogy. He also stars the short stories Will and Distillation.

Zeus is considered divinely handsome and fair. He has golden blonde hair, fair skin, and gold eyes. His golden beauty is similar to his mother, Rhea.

Zeus is charming, carefree, and known for his intelligence. He is kind, open, and hopeful. He loves all of his beloved six siblings. Hades used to be Zeus's favorite sibling and had always looked up to him. As a young god, he was very sensitive and sometimes cries for others. However, throughout the events of the stories and his destiny of becoming the King of Heaven and Gods, Zeus has become distant, harsh, and indifferent. He is lustful, having many affairs (before and after marrying Hera) with mortal women and goddesses alike. He holds great hatred towards Hades, but deep down (much to his dismay) he still cares for his eldest brother. As King of the Gods, Zeus is intelligent, mighty, ambitious, ruthless, justified and is considered the most powerful.

Zeus's first and true love was Metis. But after her tragic death, Zeus is grief stricken and severely broken hearted. And on top of that, Mother Earth named Gaia placed a curse on Zeus in which he may not ever know Love. Because of that and his illusions of trying to find his lost love, Zeus forbids Hera to be near him. Zeus cares for Hera very deeply and does not want to see her hurt and mistreated by him. Because of Hera, he can slightly connect with Metis. Since Hera is both the only one who truly loves him and is the only hope for Zeus to find love and peace again, he takes her as his only wife and queen. Although he cannot feel love for her yet, he can feel and appreciate her love for him. There are hints that he is very slowly falling in love with her. 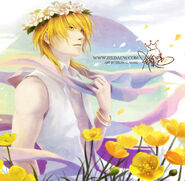 Add a photo to this gallery

Retrieved from "https://zeldacw.fandom.com/wiki/Zeus?oldid=4924"
Community content is available under CC-BY-SA unless otherwise noted.